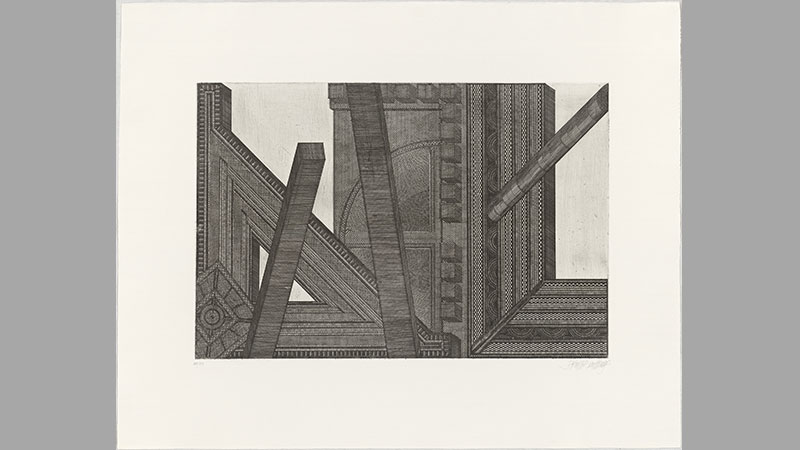 «Please Scroll Down for English» 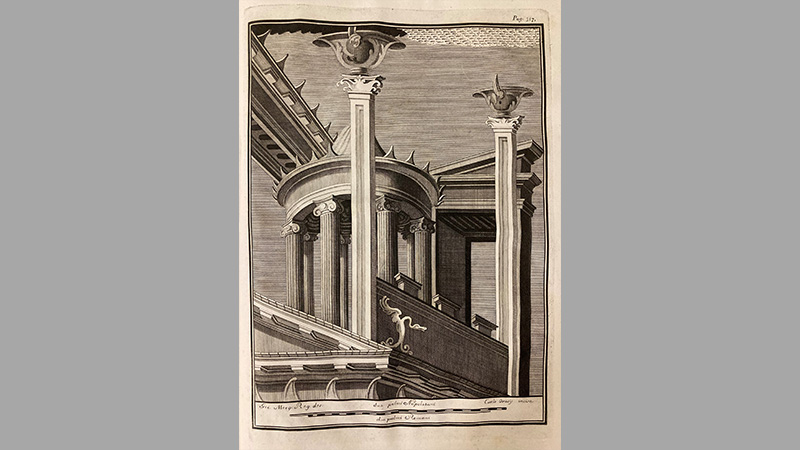 Architectural profiles
The two etchings are strikingly similar. A jumble of elements of classical architecture, arranged in a frame. The collection of fragments appears at once as a graphical exercise, where architectural motifs flesh out a composition of orthogonal and diagonal elements, and as a perspectival representation of building fragments, brought together in an implausible construction. One appears to provide a close-up of a fictional building detail, the other a view of superimposed buildings.

From different centuries
Still, their provenance could not be more different. The first image is a sheet from Die neue historische Architektur von Johannes Gachnang. Das Byzantinische Buch, published in 1968. Gachnang was trained as an architectural draughtsman and had worked amongst others for Hans Scharoun (1893 – 1972), the architect of the Staatsbibliothek and Philharmonie in Berlin. In parallel he developed a practice as an etcher and later as a curator. This piece is part of a series of fictional compositions inspired by a stay in Istanbul. The second image can be found in a five-volume publication dedicated to the paintings discovered in Herculaneum, the Roman city covered under the lava of the Vesuvius. After its discovery in the early 18th century, the site was eagerly explored by archaeologists of various stripes working under the aegis of the King of Naples. As such, Le pitture antiche d’Ercolano forms part of the mid-18th century attempts to document the new vestiges of antiquities that came to light in this and other sites such as Pompei and Paestum, which enriched and complicated the common understanding of the art and architecture of Roman antiquity.

Concentration on architectural elements
In short, Gachnang’s etching is a modern piece of art, while the other is the historical record of a scientific enterprise. If this at first seems to set the images apart, it also suggests a filiation. Gachnang’s artistic invention shows great awareness of the tradition of which the Herculaneum image forms part. By adopting the medium of the etching, and applying it with such meticulous care, Gachnang refers to precedents such as the one shown here, etchings aimed at rendering artifacts with the greatest possible accuracy. The allusion to this tradition is even more explicit in the title of the series, with the seemingly paradoxical and ironic “neue historische Architektur.” Isn’t a “new historical architecture” exactly what the Herculaneum print shows: a previously unknown historical architecture, now made available through the medium of print?

Does this imply that the examples provided by both etchings are equally plausible or implausible? The feature that perhaps contributes most to this confusion is the shared emphasis on architectural ornaments, and more particular profiles. The prints do not show buildings as a whole or plans and sections, but put forward the materiality and articulation of the elements from which these buildings are composed. It is there that both prints situate the realm of invention and construction.

And as such, in the realm of the printed page, together they seem to hint at something eminently architectural.

Guest writer: Prof Dr Maarten Delbeke, Chair of the History and Theory of Architecture ETH Zürich, and Co-Curator of the exhibition „The Hidden Horizontal. Cornices in Art and Architecture“ at Graphische Sammlung ETH Zürich (25 August – 14 November 2021)